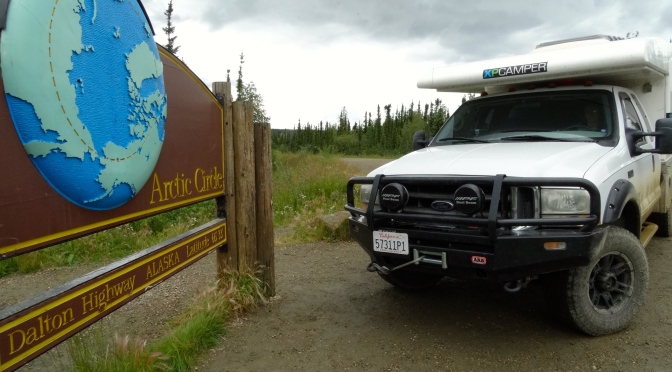 After our time at Laughing Eyes Kennel we had a quick lunch and did a load of laundry before getting on the road to Fairbanks. The drive to Fairbanks was uneventful and we found a beautiful campsite a few miles outside of town at Tors Trailhead State Campground which is along Chena Hot Springs Road.

The next morning we felt the need for a workout so we tried to find the nearby trails. Unfortunately, every trail we found seemed to end in a mosquito infested bog. After getting bit up and going nowhere we ran back to the campsite and ran loops around the campground. Not the most interesting run I’ve ever been on but we were among the trees and ran along a river for a very small portion of the loop. With the workout over we went to Fairbanks to prepare for our drive along the Dalton Highway to the Arctic Circle.

We headed north out of Fairbanks toward the Dalton Highway. Just a few miles north of Fairbanks is a viewpoint of the Alaskan Pipeline whe

re we stopped to get a close-up look at the pipeline. We met a local who asked us about our XP and then told us that we needed to stop at High Top truck stop for their pies. We took his advice, (who can pass up a great pie recommendation?) and I had a blackberry rhubarb pie which was really good. I love strawberry rhubarb but I think I have a new favorite!

The drive along the Dalton Highway was a beautiful mix of varying landscapes from sycamore spruce forest and open tundra. The drama unfolds as you drive north starting with sycamore spruce forests then the country opens up to expansive views of green tundra and hills. We stopped at an interesting outcropping of jagged rocks called tors jutting out of the tundra landscape. They’re created by the extreme freezing and thawing of the ground causing the rock to be thrust upward creating the outcropping. As we walked along the interpretative trail Darryl noticed a cloud formation that looked like a tornado off in the distance.

I read about how dangerous the Dalton Highway could be and that the truckers along this stretch of road were ruthless and tourists should get off the road as they barrel down the road spraying gravel and dust in their wake. Trucks have the right of way so you do have to move over but it isn’t always possible to actually get off the roadway. Perhaps my imagination is worse than reality but I thought they were courteous, slowing down when approaching and never pushing me off the road from behind. 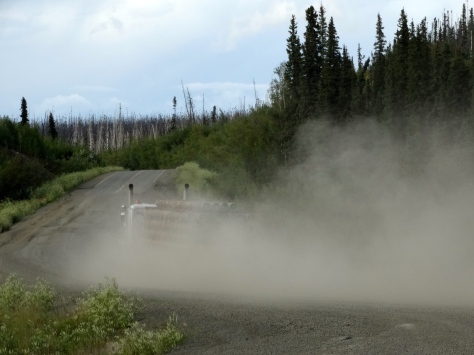 We had a beautiful day driving north along the highway and I wanted to take advantage of the wonderful weather and stop to see the massive Yukon River. I thought we could enjoy a leisurely lunch sitting along the river and taking in the views. One step out of the truck into the mosquito clouds along the river changed that plan pretty quickly. I snapped a couple of photos with my iPhone and away we went again. Not the greatest photos but I wasn’t about to make a blood sacrifice for a better shot.

The Dalton Highway begins 84 miles north of Fairbanks and was originally built as a haul road for truckers to transporting supplies for the construction of the Trans Alaska Pipeline and to the oil field operations at Prudhoe Bay. We only made it as far as the Arctic Circle at mile 115 which is the northern-most point on our trip at N 66 33′, W 150 48.

From here we basically turn around and head south to Ushuaia, Argentina, a mere ~30,000 miles away depending on the number and extent of our side trips. Although it would have been cool to get to Prudhoe Bay, neither of us had a burning interest to see the oil fields which would have added an additional 600 miles (round trip) to our journey.

We stopped at the Hot Spot Cafe on the return trip to Fairbanks. They had the best food that we’ve had so far in Alaska! I was completely surprised that a little cafe in the middle of nowhere along the Dalton Highway would have such tasty food. While we waited for our food, the owner’s (Theresa Morin) mom shared stories with us about bears nosing around the place for food. Just a few days before a grizzly was walking around the building just under the window where she was working. She looked out to see who it was and saw the bear. They have a bell that she started ringing and Theresa came running out of the nearby house with her pink AR15 semi-automatic. After a few shots in the air the grizzly high tailed it to the wood frightened away by the racket these two women were making. She tells the story like it’s just another day at the Hot Spot Cafe. That’s Alaska! 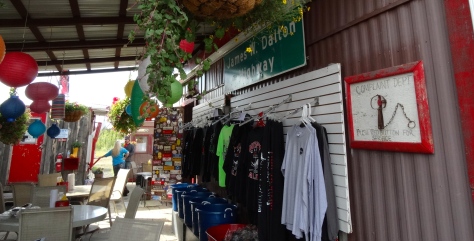 It started to rain after leaving the Hot Spot Cafe and I learned just how treacherous the Dalton Highway can be. I’m sure it’s nothing like driving the road during winter icy conditions but in the rain the road turns into a slick sludge of dirt and calcium chloride (used to keep the dust down during the summer) which our tires glided over. In some sections it felt like I was driving on black ice or hydroplaning. Either way, it was a stressful drive back!

The truckers that make a living driving this haul road throughout the year have what is considered to be one of the most dangerous jobs in the road. I was lucky that most of my drive time was during perfect weather and limited traffic. Once we reached camp I was grateful that this section of road was behind us. Although our time on the Dalton Highway was packed with beautiful scenery and I’m left wondering if we didn’t leave some of the best scenery behind us since we didn’t get to the Brooks Range and other spectacular views further north. Perhaps for a future trip.

Back in Fairbanks we spent the next couple days at the fair. The first night we saw a really interesting band called Cello Fury. Darryl spotted the flyer for them at our campground at River Eagle RV. We took a cab to see the Pennsylvania based band. Their sound is a “fusion of progressive rock and classical music styles” (from Wikipedia). Most of the pieces were original compositions by them with a rock feel but they also played a couple pieces that highlighted their classical training. The place was packed and the audience loved their performance, I did too! Check out this YouTube video and you can listen to them play against a backdrop of video footage of their Alaska 2014 tour.

Under the category of “events we’ve never attended before this trip” was going to the Demolition Derby at the fair. I wasn’t interested in going but Darryl pointed out that we’d probably never see another one so why not now?! So we paid the cover fee and found a place in the bleachers to watch the action. We happened to be attending the grand finale event of the week with 7 trucks that were pretty beaten up but still operational (barely). These 7 finalists were competing for the championship. Each truck has a stick attached to the frame on the driver’s side which he’ll pull off when he “surrenders”. These guys ram into each other with the back of their vehicles hitting the front end of the other vehicles. They’ll gang up on one vehicle and take it out in a coordinated ramming and finally the last ones standing start after each other. It’s crazy! These guys hit each other so hard that they knock over the cement barriers and tires are jettisoned during collisions and clods of dirt are launched into the stands.

Our time in Fairbanks came to an end and now back to the road. Coming up is on of the other most scenic roads in Alaska, the Denali Highway and then Denali!! I can’t wait!!!

2 thoughts on “To the Arctic Circle”