We had a beautiful drive through the Canadian Province of the Yukon Territory. If this is what is in store for us as we travel through Alaska then we’ll have some beautiful drives ahead of us! We stopped at Kluane Lake for lunch and took a few moments to capture the scenery around us. There were some boon docking options along the lake but we decided to drive on through to Tok, Alaska taking advantage of the long daylight hours.

Our first stop  in Tok was at their visitor’s center where Darryl found a pamphlet advertising a local dog musher and a tour of his kennels. We called Hugh Neff, the 2012 Yukon Quest winner, to ask him if we could schedule a tour of his kennels. He invited us to his talk later that evening at a local hotel were we could meet one of his dogs and arrange a time for a tour the following morning. He also suggested that we drive out to Chicken, Alaska for the day. Chicken was on our pre-trip planning map and we were on the fence as to whether to drive out there or not. We just drove 400 miles the day before so we were a little road weary. At Hugh’s suggestion we decided that we should make the drive.

The woman at the Tok Visitor’s Center told us that there were now six full time residents in Chicken. After visiting Chicken, I honestly can’t tell you what they do all year round. During the summer the town probably doubles in size with a small transient population that spends their summer in Chicken working at the tourist shops. They live the rest of the year in Dawson City leaving the locals to stay through the harsh winter. The roads aren’t plowed so their only way to the nearest town is by snow machine.

We had a nice lunch at the Chicken Creek Cafe then spent some time walking around the town. The sights include a giant metal chicken at the top of a small hill along with a sign post showing the distances to cities with name associations to Chicken, a gold panning operation and a historic town. The day was cloudy and overcast which limited the typically incredible scenic views along the road to Chicken. It was still a nice day trip from Tok and worth the extra time in the driver’s seat. 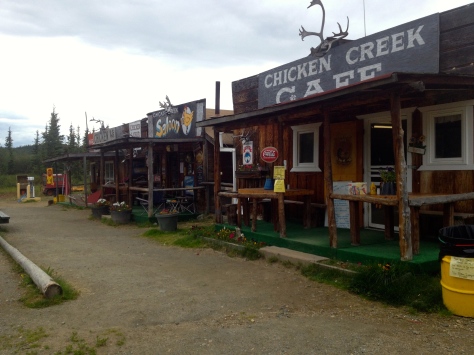 Once back in Tok we went directly to Hugh’s talk where we learned about the Yukon Quest race which is arguably a tougher race than the famous Iditarod. Hugh explained that although they are both the same length, 1,000 miles, the terrain is more remote and more rugged. There are less than half the number of checkpoints in the Yukon Quest than during the Iditarod. Fewer checkpoints means that the Quest teams have to carry substantially more supplies (i.e. more weight) to support themselves between these resupply opportunities.  All Quest teams have a mandatory 36 hour layover in Dawson City which is 12 hours longer than the mandatory 24 hour layover in the Iditarod at the checkpoint of the racer’s choosing.

Hugh’s passion for his dogs and mushing is evident from the first moment you meet him. He brought one of his dogs, Walter, to the talk. I was shocked at how small the dog was and doubly shocked to find out that he was part German Shorthair just like my Jhango. He certainly hid that side of his breeding since he looked more like a husky / german shepherd mix. Walter is one of Hugh’s lead dogs and has a charming personality. We got the chance to see Walter at work the next morning.

When we arrived at Hugh’s “Laughing Eyes Kennel” the following morning all we heard were dozens of dogs barking. Hugh was just finishing the morning feeding of fish gruel. He told us we could go play with the puppies while he finished feeding the dogs. They were soooo cute but I resisted going into their kennel to play with them because they were covered in fish gruel. I don’t mind getting a little dirty but we were both on our last pair of pants. Smelling like fish for the day didn’t sound so appealing.

As soon as Hugh started harnessing the dogs the barking hit a frenzied pitch as each dog tried to convince Hugh that the were the most eager to run this morning. And once they were in their harnesses the dogs lunged against the harnesses in a vain attempt to get the workout started. They did not want to wait around! I couldn’t believe how small these dogs were and they are all different breed mixes. They are lean and completely focused on their task. Walter was Mr. Social the night before at the talk but when I came over to greet him while he was standing at his lead position he wouldn’t move to look at me. He was all business standing there with his head down letting the team know that they can’t go until Hugh yells “hike’.

Their summer training means pulling a quad runner along the trails around Hugh’s property. They go out only three times a week for around 20 minutes to maintain their fitness. The real training doesn’t begin until late summer / early fall when Hugh takes them out for 70-100 miles runs. These dogs are incredible athletes and they love their job and they love Hugh. The interaction between Hugh and the dogs was inspiring. It’s rare to see somebody so in love with their work. 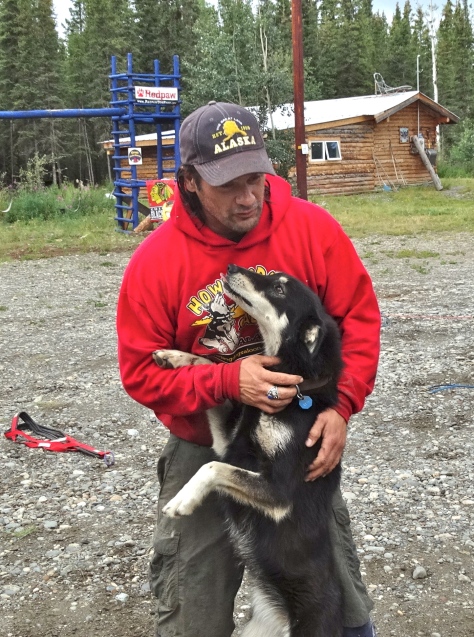 With the dogs all harnessed, they pulled the three of us on the quad runner for 20 minutes. Take a look at the video to see the speed of the dogs and you can hear their excitement. The clip is from the first few minutes of the run. They settled into a nice jog a little later but even then Hugh was braking at times to keep the dogs from running too hard. The temperature was in the low 60’s when we started which is really warm for the dogs. It didn’t dampen their enthusiasm though! 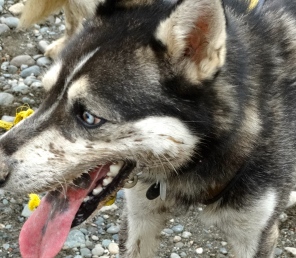 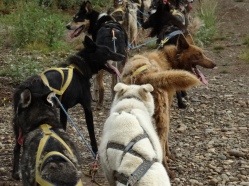 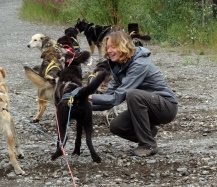 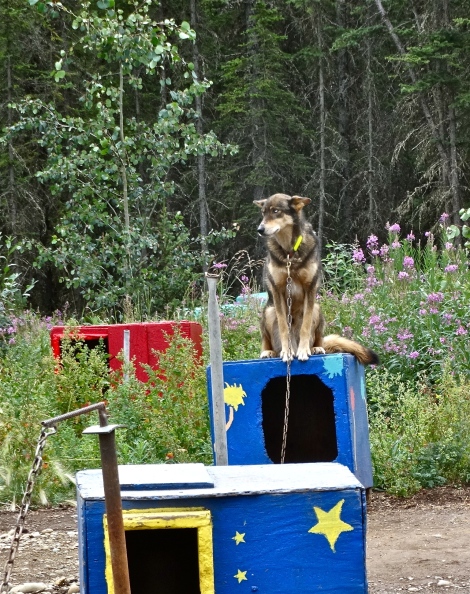 We really enjoyed our time with Hugh and his dogs. Hugh shared with us his story of growing up in Chicago and his dream as a kid of moving to Alaska to become a musher. What a great story and then he wins the 2012 Yukon Quest 12 years after his first 1,000 mile race. Hugh is an advocate for reading and spends much of his time speaking at Alaskan schools talking about the importance of reading and following your dreams. This will surely be one our our highlights during our Alaska portion of the trip.