We returned to Canyonlands to complete our tour of the sights along the canyon rim. Our first stop was at the Shafer Canyon overlook where we had a great view of the trail that we drove the day before.

After Canyonlands, we went into town for lunch and then out Kane Creek Road to check out their 4×4 routes. Although we have visited Moab many times in the past, this was our first time on the trails along Kane Creek Road. From 190 in Moab, turn west onto Kane Creek Road (there is a McDonald’s at the intersection) and the road will eventually run along the eastern side of the Colorado River and then branches off into the canyons. There are campgrounds along the way and eventually you’ll hit the Amasa Back trailhead. We took special note of this area for a future run! We continued along until we came across the sign for the Kane Creek 4×4 trails.

After our reconnaissance of Kane Creek, we went back into town for a late lunch then out to find ourselves a place to spend the night. We opted for Sand Flats Recreation Area which is in town. It’s where the popular “Slick Rock” trails are located. We found perhaps the last site that was available which was at the entrance of “Fins & Things” 4×4 trail. The next morning we learned why the site was still available since it’s at the start of a very popular route and these people like to get out on the trail early!

After our breakfast we started out to Kane Creek for our own 4×4 expedition. Darryl was patient with me as we walked through the more technical sections and discussed how we would drive through them. I actually stayed in the vehicle for most of the sections but I did get out to take some photos of the action.

Darryl’s patience paid off since I got into the driver’s seat on the return and drove us back most of the way with Darryl standing on the road guiding me through the rougher sections. There was a point where I had just one front and one rear tire in the air sitting at a precarious angle. Our FJ is AWESOME! Although I was at a pretty steep angle, the FJ felt solid and I felt completely confident in its ability to get me through the section. No photos of this, you’ll just have to believe me.

On our return, we stopped at the petroglyphs and snapped a few photos.

What an awesome day!

From Monument Valley we drove north along highway 163 hooking up with 191 which drops you into Moab. It’s a pretty barren area to drive through but there were a few stand-outs along the way. The first was the area around Mexican Hat, U just 23 miles outside of Monument Valley.

We stopped just long enough for me to take this photo. I looks like a destination for campers and fisherman. We saw a number of RV’s along the San Juan River. The area is beautiful but a little too remote for most people.

After Mexican Hat, the terrain becomes high desert with little to break the monotony until you come to the Needles area and then later the La Sal Mountains come into view. Photos of these two beautiful areas will be posted later. 🙂

We finally arrived in Moab toward late evening so we went straight to the local Thai Restaurant. Darryl went in before me, alone, and asked for a window table but was told that they won’t seat him there. We couldn’t find any reason for this given that there was nobody in line after us and there was plenty of empty seating. She even told the person who seated him that he was NOT to be put at the window table. I arrived a little later and we had our meal and left feeling pretty annoyed at the inhospitable treatment. They did seat another couple at the window table shortly after I arrived. We definitely won’t be going back there again!

After dinner, we went to find a campsite along the Colorado River. I was really looking forward to this since the views are spectacular. We’ve been coming to Moab for years but we always stay at Red Cliffs Lodge which is about 20 miles outside of town along the Colorado River. Now we would be camping on the river in a few minutes!! Not so fast…unfortunately, there was not a single campsite available at 10 pm. We should have known better given that we were visiting during their high season. We drove to Arches National Park and were immediately met with a “No Vacancy” sign on our way into the park. This is not looking good. Our next option was Canyonlands which is a little further out of town so we should definitely have luck here! Nope, all sites were full. As we were considering our options we drove past a motorcyclist who was stopped along the dirt road. We asked him if he was ok, and he replied “Yes, just talking to my wife on the phone. Are you looking for a campsite? I know of a perfect spot for you!” Awesome!! He said his good-byes to his wife and then we followed him out to BLM land where he showed us a perfect spot for our home for the night. We ended the evening on a good note with some help from a stranger. 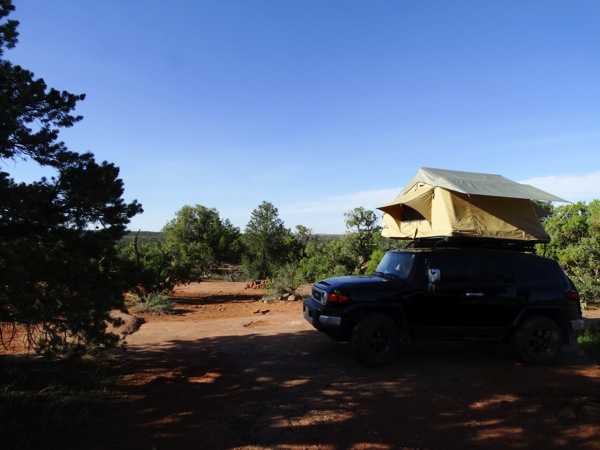 Since we were just a short drive to the entrance to Canyonlands, we made this our first place to spend the day in Moab. There is a drive along the rim of Canyonlands that provide some beautiful views of the park. We could see the infamous White Rim Trail which we talk about mountain biking one day. On this trip we considered driving it. The road is 100 miles long and winds its way around the Island mesa top. It can take 2-3 days in a 4×4 and up to a week on a mountain bike. The really good riders do it in less than 24 hours!

Up to this point, we have been on pretty tame roads with the FJ. Darryl was looking forward to getting the FJ out on some real stuff to see how it handled. Me? Not so much…but I was warming to the idea. I saw those beautiful roads winding through the valley and couldn’t imagine leaving Moab and not getting on them. After studying the map for about a nanosecond, I’m not much of a map reader, the Shafer trail caught my eye as an alternate way back to town with the added bonus of driving through a portion of Canyonlands. I went to talk with a ranger about the road conditions and what we should expect. Darryl was all in but I was still hesitant to do anything too aggressive. Let’s just say that I like to keep all four wheels on the ground but I was determined to push myself out of this comfort zone, otherwise why buy an FJ Cruiser?! The ranger told me that this would be a perfect road for me to get comfortable with the terrain and that there was absolutely nothing that our car couldn’t handle. I’m sold! But I’ll stay in the passenger seat…for now. 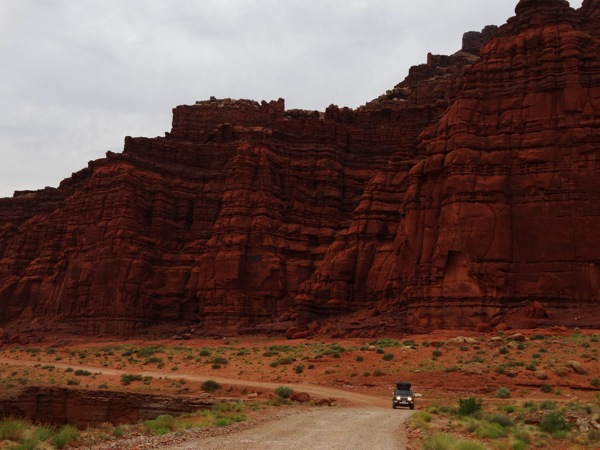 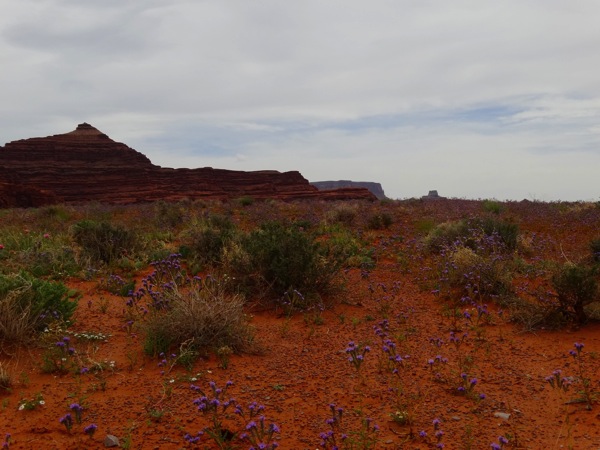 We took almost 3 hours to drive the Shafer Trail to Potash trail which drops you into Moab. This distance is roughly about 35 miles but we stopped a lot to take photos and enjoy the views. These photos don’t do it justice but I can say that the day was amazing. We ended our day back at our lovely BLM campsite from the night before.