We are now entering the Navajo Nation portion of our trip. Our first stop was at Navajo National Monument where we spent the night at Sunset View campground. Their campgrounds are free they are on a first come basis and flush toilets are available. We arrived late so we just set up camp, had dinner then went for a walk around the campground. During our walk we met the man who was in Darryl’s “morning kayaker” photo the previous morning at Lake Powell. It’s a small world!

The following morning we decided to stop in at the visitor center to inquire about their guided tours to see the Betatakin ruins which are only accessible with a Navajo guide. Unfortunately, we arrived two weeks too early since their tours don’t start until Memorial Day weekend. But we were able to hike the three relatively short rim trails (Sandal Trail, Aspen Trail and Canyon View Trail) to enjoy the views of the canyons and get a peak of the ruins from the Sandal Trail.

These ruins were occupied by the Ancestral Puebloan people dated back to 1250-1300. It is thought that up to 150 people were living here at its peak. The reason for their departure is unknown.

Hiking here is a beautiful and solitary affair. We shared the trail with only one other person. It was nice to be away from the crowds in Lake Powell and enjoy the peace within the canyons.

Spider Rock is a family owned campground at the far end of South Rim Drive, 10 miles south of the visitor center. I had my first taste of fry bread made by Howard’s grandchildren (Howard is the owner). The fry bread was ok but then again, I’m not a huge fan of bread of any kind so you should try it for yourself if you have a chance. The facilities are quite rustic but there are bathrooms and solar heated showers available. 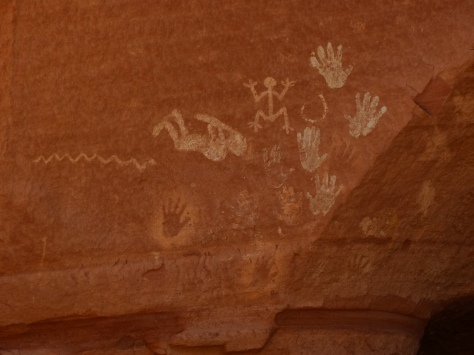 After our tour with Tully I had just enough time to take another tour of the canyon but this time on a horse! I was lucky enough to ride this beautiful mustang named Sherman. It was basically a private tour just to “First Ruin”. Riding through the canyon on horseback was a wonderfully peaceful way to experience the canyon.

Our next stop on our Navajo Nation tour was Monument Valley. I have looked forward to this day for many years! I loved driving through the valley and photographing these massive monoliths. If we come back through we will definitely stay in one of the campsites within the valley to have it to ourselves rather than sharing the roads with a couple hundred other tourists.

We arrived late in the evening at Hacienda de la Habana, our campsite in Mulege.

This place is near the edge of town with a seemingly complicated set of directions down unnamed dirt roads but it’s well worth the extra effort plus, there are signs at every corner for the camp’s restaurant, Ray’s Place.

We stayed here for three nights but the restaurant was never open during that period. We did have some fresh fruit picked for us by the grounds keeper. The business hours were a little hit or miss at many of the restaurants and other small stores all throughout Baja. It was very common for places to be closed for most of the week with nothing indicating when they might be open.

The next day, we arranged for a tour guide to take us to the “arte rupestre” which are the petroglyphs that are found at various sites throughout the Baja peninsula. A certified guide must accompany tourists at the La Trinidad petroglyphs. Ours would be Salvador Castro Drew of Mulege Tours.

The rest of the day was spent enjoying the scenes of the small town of Mulege and hanging out in the local café with “almost free wifi” which meant that we just needed to purchase something to use their internet. I finally posted my first blog on this day!

We met our guide Salvador the following day for a full day of easy trekking through the mountains along with a family of three from Florida.

Our tour included a stop along the road where we could get our photo taken next to a giant cactus. Salvador told us about the medicinal and other practical uses for the various plants of the region. At the beginning of the tour he said that with the knowledge that he was about to share with us we would be able to survive out in the Baja desert. There were plants that could cure ailments of the stomach, liver, or colon; cure headaches and potentially cure cancer. He showed us anti-coagulants to stem any bleeding. We learned about mushrooms used as food and another used by the priests for their visions. After our survival training, I can confidently find water in a barrel cactus and then use the leaves of the creosote bush to eliminate my foot odor. All of the other pearls of wisdom were forgotten by the time we returned to the van to continue the tour.

Salvador had a wealth of knowledge about the local petroglyphs and the history of our very limited knowledge of this arte rupestre. The petroglyphs in the area have been dated to between 2,000 and 7,500 years old but this is still debated. Ancestors of the now extinct Cochimí Indians or Guaycura Indians were the likely artists of the La Trinidad area. Nobody really knows the meaning of this ancient artwork but there are many guesses.

Salvador told us how the last links to our understanding of these ancient people were lost after two events; the extinction of the native Cochimí Indians and the exile of the Jesuits from the Baja Peninsula by King Carlos III of Spain. According to Salvador, the Jesuit missionaries gained the confidence of the Cochimí Indians. The Indians began to share with the Missionaries their knowledge of the area and about its history including what they knew of the petroglyphs. Some believe that the Cochimí ancestors may have been the artists some hundreds of years earlier but the meaning and purpose of the petroglyphs was lost through the generations.

The Jesuits were meticulous in their documentation of the land, the people, the geography etc. They documented what was told to them by the Indians but upon learning of their impending exile from the peninsula by the Spanish crown the missionaries destroyed their writings rather than leave them for the benefit of the Spanish. Only a few documents remain from the Jesuits describing some of the petroglyphs in the southern part of the peninsula.

The figures that we saw were of the animals that were hunted (deer, turtles, fish), figures of humans, perhaps their shaman, and hunting figures, hands, and other unknown figures.

Throughout the La Trinidad area, archeologists uncovered artifacts of early life among these ancient people.

Our tour ended at the Mission Santa Rosalía in Mulegé. This mission was founded in 1705 by the Jesuits and taken over by the Franciscans in 1768 after the expulsion of the Jesuits from Baja. It ceased to function as a mission by 1828. Today, there is a priest that will come to the mission and conduct mass at times and there are weddings that will take place here. This mission has been completely restored but retains some of the original stones.

We ended our tour overlooking the beautiful little river that runs through town surrounded by date palms.