We heard mixed reviews about Todos Santos, that it was a tourist trap and an artist community of “gringos painting their own interpretation of a pelican” but we wanted to form or own opinions of the town. We had marked it on our map we used for planning this trip, chosen because it was on the list of Pueblos Magicos, a promotional campaign by SECTUR to boost tourism in Mexico. We only spent a few hours in the town, wandering in and out of the artist galleries and souvenir shops. Because of the poor economy and the US media saying that Mexico was dangerous, there were few visitors, empty streets making the street vendors a little more pushy with their invitations for us to look inside their shops. It was a cute little town but it was sad to see how hard hit they are by the drop in tourism. I can’t imagine how they survive this!

I did purchase a cute necklace while in Todos Santos from a nice young woman and then just down the street, I had Darryl take my photo in front of the “Hotel California” sign although it’s highly unlikely that this hotel has any connection to the Eagles’ song.

We stopped at the Cultural Center which had a lot of prints by Frida Kahlo. It also had an almost disturbing number of human skulls on display for reasons that I didn’t understand.

We took a few photos of the town’s mission, Mission of Santa Rosa de Todos Santos. The mission has been completely renovated and looks like a modern day church both inside and out. Outside the church there was a boy of about 13 years that asked me for a small donation. He told a story of needing the money to buy tennis shoes and other gear so he could play baseball. He got 25 pesos out of me, equivalent to couple dollars. Darryl called me a sucker. Later, I saw an older man come up to the kid to talk with him a bit, then they left the area together. I’m sure Darryl was right. 🙂 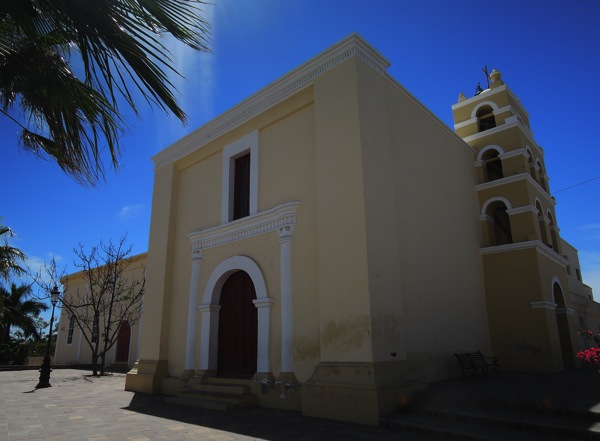 Darryl also found these cool patterns and textures to photograph. 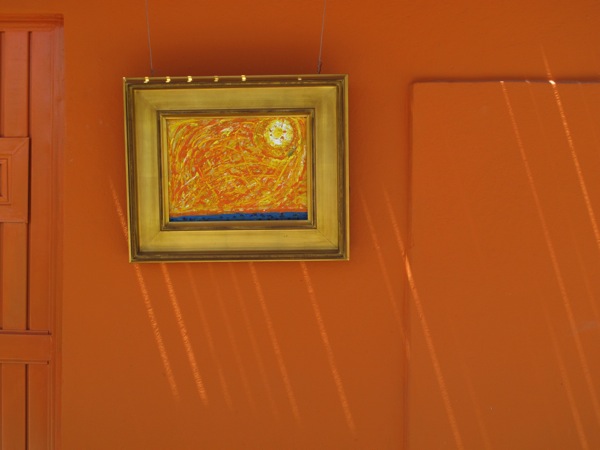 After Todos Santos, we went in search for sleeping arrangements. There was a place on the beach that we wanted to stay but the campground description in our Baja Camping book stated that they require a 3 night minimum. We assumed that because there were so few tourists coming through, they would relax this requirement for us. Well, we we were wrong. But the owner was nice enough to point us to a section of beach where we could stay without being hassled by the police and it would cost only $2. We found the location and spent the rest of the afternoon enjoying the beach, writing, taking photos and watching the crabs scurrying over the rocks and get pummeled by the waves. We later camped at Baja Serena Campground. They had the cutest lab mix puppy and the best showers in all of Baja so far! It was at Baja Serena that we met the Canadian commercial fisherman who told us about the table seiners that I included in an earlier post “People are so Nice”.

We continued south on Mex 1 to Cabo San Lucas which is at the very tip of Baja California. We had really good tacos at Caffé Amore internet cafe next to Amigos del Mar along the marina.  Afterwards, we went in search for the trail that leads to the top of Mount Solmar at Land’s End. Unfortunately, we were denied access to the trail that starts at Solmar Beach on the Pacific side. There is now a resort there and they wouldn’t let us through. So we decided to try to find a path over to Lover’s Beach which required lots of scrambling over rocks going from beach to beach. After some searching, we decided that it was too sketchy to try to scramble to the top, being content to stay along the beautiful beaches.

After our day in Cabo San Lucas, which is at the southernmost point of the baja peninsula, we started our journey back north to the US. We will take a different route north but there will be a few towns that we will revisit.

We decided to take a break from the roof top tent for the night and stayed at the Posada Real resort in San Jose del Cabo which is just 20 miles north of Cabo. After spending $5-$15 per night in the RV or camping sites throughout Baja, I had a hard time splurging for the fancier resorts so I convinced Darryl to settle on the Posada Real resort which was $185/night. All of the resorts we looked at required that we pay for the all-inclusive option which meant that all of our food and drinks were included. We had no interest in eating at the resorts so this was a little annoying to me. We settled on a smaller resort slotted between the other larger, fancier and more expensive ones. I realized pretty quickly that I should have spent the extra $100. We had to ask for a different room because our first room smelled like cat urine…yuck.

We followed the coastal roads out of San Jose del Cabo to the town of La Ventana. The first road we picked up was Carretera San Jose del Cabo-Cabo Pulmo out of San Jose del Cabo. It’s a grated gravel road that winds its way along the coast toward La Ventana. The road’s name changes constantly along the way. We were absolutely stunned by the beauty of the waters along the route. We stopped in La Trinidad for the night and stayed at La Trinidad RV Ranch. They had a really nice set-up and we loved all of the quirky pieces of art and other displays throughout the place. (Click on any photo below to enlarge.)

The next day we set out for La Paz but first, we wanted to make a short stop in La Ventana. We heard about this town from Renee and Mark who were on the whale shark tour with us. Along the way we noted a few other places for our next trip to Baja. We will add a few days of snorkeling in Cabo Pulmo and / or Aqua Verde. La Ventana is a little town set along beautiful beaches with brilliant aqua waters. It was incredibly breezy the day we were there and given the number of windsport shops, this is likely the norm which isn’t a bad thing considering the heat! We had a very tasty lunch at Las Palmas Fish & Bar in El Sargento and spent a few hours enjoying the views and watching the kite boarders.

We ended the day at Campestre Marinatha in La Paz. We stayed there when we came through the first time and found them to be very friendly with everything that we liked to have. It was nice to be back in familiar surroundings even if it was just for a night. When we arrived, we ran into a couple that we saw in Mulege and we ran into them later in Loreto. It seems that all travelers follow in each other’s footsteps throughout Baja, eventually crossing and re-crossing paths along their journeys. It’s one of the things that Darryl and I are really enjoying as we continue along our travels.

Travel Tales With A Twist